You’re moving onto the campus of Georgetown University for the first time. Questions abound. Will you have a cool roommate? Are the bathrooms really that bad? Unfortunately, having a cool roommate is something we cannot predict. On other details, we can offer some help. As new students, you will most likely be living in one of the four freshman residence halls — Village C, Harbin Hall, New South Hall or Darnall Hall — each with its own unique layouts, amenities and floor culture. Here’s a rundown of what to expect.

Split into two wings, the 100 percent freshman West Wing and the freshmen-transfer-upperclassman East Wing, Village C is the only residence hall on this list with private bathrooms — an attractive offer, if you happen to be a germophobe and the thought of communal showers gives you hives. The tradeoff is that Village C rooms run smaller than small, distributed evenly among doubles and a few rare singles. The fl oors are moderately sized, with around 30 to 40 students each. Nearby, you’ll fi nd easy access to O’Donovan’s Hall –– better know as Leo’s –– Dahlgren Quadrangle, the Healey Family Student Center and the wind tunnel leading to Cooper Field. Life in Village C can be closed-off compared to other dorms, given its relatively small fl oors. Its position on campus and its bathroom situation, however, make it one of the more sought-after residence options on campus, even if the selection process is random. 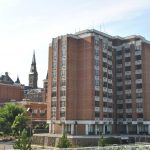 Harbin is a different story. President Bill Clinton (SFS ’68) lived in Harbin in 1965, which is an interesting piece of history yet also a testament to the building’s age. You’ll notice it pretty easily. Harbin is the only freshman residence hall on campus with its double rooms arranged in clusters according to gender, which are nests of three or four same-gender rooms throughout its spiraling hallways. You’ll fi nd some of the closest fl oors and clusters in Harbin due to this unique fl oor plan. The building’s elevators are among the fastest on campus, an asset considering that the nine-fl oored dorm is one of the taller buildings on campus. Its student-to-fl oor ratio is similar to that of Village C, and its location puts it relatively halfway between the Leavey Center and the front lawn, providing a short and manageable walk to most places on campus. The New North staircase leading up from the building’s patio will almost certainly shave minutes off your travel time crossing campus. 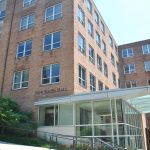 You’ll find the most state school-esque dorm room in New South Hall. With long, straight hallways, almost 100 students per fl oor and a reputation as the party dorm, New South makes for a polarizing arrangement. It is almost always loud and, depending on your proximity to the communal bathrooms, may set up some unfortunate encounters, like running into a group of kids on the other side of the building that you’ve never seen before wearing only your towel. New South rooms also feature a sink, mirror and medicine cabinet, which will make your before-bed routine far easier than in any other dorm with communal bathrooms. With so many people on each fl oor, the residence hall’s social culture can be overwhelming, with large packs of people from each fl oor usually forming throughout the beginning of freshman year. But don’t be discouraged! For every impossibly friendly social butterfly on your floor, there are five other perfectly friendly individuals still trying to figure out the tumultuous first few weeks of college alongside you. 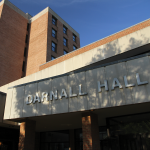 As the only residence hall far north of the other three, closer to the medical school and the hospital than anything on campus, Darnall Hall gets a bad rep. You’ll hear students complaining constantly about the fact that they live there, even if they’re afforded things like easy access to the Leavey Center, the upperclassman social hub of Henle Village and 24-hour food at Epicurean and Company. Darnall’s location is a virtue and a vice in this way. In terms of its rooms, Darnall is the only residence hall with twin beds instead of twin XL, so plan your Bed, Bath & Beyond shopping spree accordingly. Its fl oors are slightly larger than that of Harbin, and boasts large hallways with a spacious, central common room. Its fl oors are also fi tted with full-length mirrors allowing you to ensure your classroom and late-night outfi ts are always on point. You’ll fi nd some of the closest communities in Darnall, afforded perhaps by its isolation in relation to the rest of the freshmen on campus and the opportunity to take late-night conversation downstairs to Epi.