You’re moving onto Georgetown University’s campus. Questions abound: Will you have a cool roommate? Are the bathrooms really as bad as people keep saying? Where will you store your archived copies of The Hoya?

Unfortunately, we can’t guarantee a cool roommate, but we can happily assure varying degrees of satisfaction on all other fronts. One of four freshman dorms — Village C, Harbin Hall, New South Hall or Darnall Hall — will be the new home to your bins, suitcases and that one weird reading lamp you’re not quite sure where to put. Whichever dorm you move into, you’re sure to enjoy the comfort of a new home and the lasting friendships of a new community.

All four freshman residence halls have at least one chaplain-in-residence, one resident adviser on each floor and convenient (read: existent and usually-but-not-always operating correctly) laundry facilities. However, each dorm has its own unique layouts, amenities and floor culture. Here’s a rundown of what to expect. 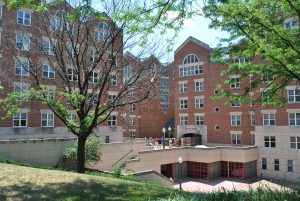 Georgetown’s newest freshman dorm, completed in 1986, is split into two separate wings. The west wing (don’t forget to take the classic “Look! I live in the West Wing! In Washington, D.C.!” photo) houses only freshmen, and the east wing includes freshmen, transfer students and upperclassmen. Village C is the only freshman hall with private bathrooms — an attractive feature for the particularly germophobic among us, for whom the thought of using a communal shower roils the stomach. The trade-off is that Village C rooms — mostly doubles, with a few scattered singles — run smaller than small; you might want to leave that extra “just in case” bin of clothes in the car. The floors are moderately sized, with around 30 to 40 students each, and the tight hallways and easily accessible common rooms lend themselves to meeting people quickly and often. Nearby, you’ll enjoy convenient access to O’Donovan Hall (better known as Leo’s), the Healey Family Student Center and the sidewalk/wind tunnel leading to Cooper Field. Life in Village C can feel secluded compared to life in other dorms, given its relatively small floors and rooms, but this often fosters tight-knit floor friendships. The dorm’s convenient location and private bathrooms make it one of the more coveted first-year residences on campus. 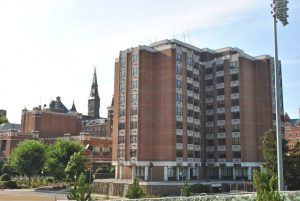 A few decades older than Village C, Harbin is best known as the one-time digs of former President Bill Clinton (SFS ’68). Harbin residents live in double rooms arranged in clusters. Each cluster holds eight or nine rooms, creating a small community sure to yield a close friend (or two or three or 17). Harbin also houses an all-girls floor, an option that incoming students can request during the housing process. Its student-to-floor ratio is slightly higher than that of Village C, and its location puts it about halfway between the Leavey Center and the front lawn, a relatively convenient location for most trips on campus. A tip from past Harbin residents: The discrete staircase leading up from the building’s patio to New North will almost certainly shave minutes off your travel time crossing campus. 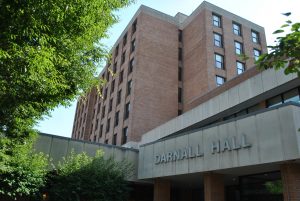 Let’s address the elephant in the room: Darnall gets a bad rep. Yes, it’s the only freshman residence hall on the far north side of campus. Yes, it’s closer to the medical school and the hospital than the dining hall or the student center. But alumni of Darnall remember the building’s hidden luxuries: easy access to the Leavey Center (Starbucks? Check. Meal swipe options? Check. Study spaces? Throw a textbook and it’s bound to land on a convenient table with a great view of campus.); a short stumble to upperclassman social hub Henle Village; and near-dangerous access to 24-hour quesadillas at Epicurean and Company. Darnall is also the only dorm with twin beds instead of twin XL, so plan your Bed, Bath & Beyond shopping spree accordingly. Its floors are slightly larger than those in Harbin and boast large hallways with a spacious, central common room fit for cooking and conversation. Its floors are also fitted with full-length mirrors, so you can ensure both your classroom and late-night outfits are always on point. Darnall has some of the closest communities in every freshman class, created perhaps by its isolation from the rest of campus and the opportunity to take late-night conversation downstairs to Epi. 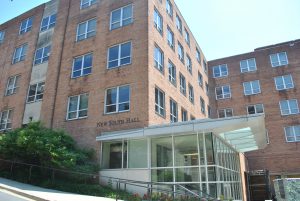 You’ll find Georgetown’s most state school-esque dorm room in New South. With never-ending hallways, almost 100 students per floor and a party dorm reputation, New South is a polarizing option. It is often loud and, depending on your proximity to the communal bathrooms, prone to cause some unfortunate encounters, like introducing yourself to a group of strangers while wearing only your towel. New South rooms also feature a sink, mirror and medicine cabinet, which make for a relatively easy before-bed routine. With such populous floors, the residence hall’s social culture can be overwhelming to some. But don’t be discouraged: For every impossibly outgoing social butterfly on your floor, there are five other pleasantly awkward students trying to weather the tumultuous first weeks of college alongside you.