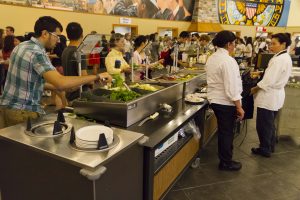 As a freshman, you’ll be eating most, if not all, of your meals at Georgetown’s sole dining hall: Leo J. O’Donovan Dining Hall. Leo’s, as it is always called by students, offers two levels of various — sometimes delicious, sometimes disgusting — cuisine. It’s not that the food is overwhelmingly bad, rather that Leo’s consistent options can get old after weeks of the same meals on end. And it’s not for a lack of effort on the part of the dining hall’s staff — they’re ever pushing out a new station or a new themed food day in attempts to pique students’ interests. Whatever your opinion on Leo’s, get used to it — it’s the only dining hall on campus and you’ll have to live with it for at least two years.

Whether you’re in Leo’s for a meal or to study, you’ll soon appreciate all of its qualities — good or bad. To get you ready to deal with this part of the freshman experience at Georgetown, we’ll take a look at the meal plans and stations that Leo’s offers on each of its levels.

By now you’ve probably already selected your meal plan but we’ll quickly go through them. Keep in mind you can change your meal plan through Sept. 6 if you find you’re running out of meals each week or that you have aren’t using all of yours.

There are three meal plan options — 14 or 18 meals per week and the unlimited plan — available to freshmen, all of which are weekly plans. The default meal plan is the 18 so chances are, unless you went into MyAccess and changed your meal plan selection, you’ll have the 18 meal plan to start. As a general rule, only athletes or really hungry people get the “carte blanche” unlimited meal plan so the 18 plan should suffice for most of you. Think about how many meals per day you’re likely to eat at the dining hall when you’re picking your meal plan. I never eat breakfast, so the 14 meal plan (2 meals per day) was perfect for me.

Each of the plans except the unlimited one also come with flex dollars that you can use at other campus dining facilities such as Epicurean and Cosi. Also included in every meal plan but the unlimited one is the ability to use a meal swipe at one of the Grab ‘n’ Go locations in either Leo’s or the Leavey Center.

The top floor at Leo’s is where you’ll enter the building to swipe in. This level has a few Leo’s staples but mainly features stations that change on a daily basis.

The pasta, wok, burrito and panini stations are three of the mainstays of a good meal at Leo’s. Each allows you to customize your meal and have it made/cooked to order. The pasta station features a variety of vegetables and meats that you can have cooked in with your pasta and your sauce of choice. The wok station serves up Asian stir fry that is served over either rice or noodles. Pick out your vegetables, meat and sauce, and the staff will cook it up right in front of you. The burrito station is Leo’s answer to Chipotle — you can get either a bowl or burrito with the meat and toppings of your choosing. The panini station has some higher-quality ingredients than the salad or sandwich bars. Go down the line and select your fillings and thee staff will put your sandwich on the panini press. Both the wok and pasta stations tend to have pretty substantial lines during peak times, while the burrito and panini lines aren’t too bad normally.

In addition to these customizable stations, the upper level has some buffet-style offerings. The home station has meals that are meant to mimic home cooking — think meat loaf, chicken breast and mashed potatoes. The vegetarian and vegan station has those options for students who desire them. These stations, while popular, can be hit-or-miss depending on the day’s offerings. The upper level also has a substantial salad bar where you can make your own salad, as well as soups and an array of desserts.

In terms of seating, the upper level has mostly larger tables perfect for when you want to grab lunch with a big group from your floor.

The stations on the lower level of Leo’s has mostly static — but reliably good — options for the taking.

The diner, home to student favorite Chicken Finger Thursday, features burgers, French fries and hot dogs in addition to its most popular offering. Next to the diner is the made-to-order omelette station, where you can customize your omelette fillings. On the other end of the bottom level is the pizza station, which features both pre-made pizzas and customizable made-to-order mini pizzas. The pizza, while not as good as some neighborhood options, is pretty reliable and has developed a following of Leo’s pizza appreciators. Next to the pizza is the recently-added grilled chicken and vegetable station, which offers those options on a daily basis.

In the center of the lower level is the circular salad, sandwich and dessert bar. Also in this area is the delicious make your own waffle station and the vat of Nutella, both popular options. On the far end of the room there is a wide variety of cereals. There is also an improved gluten-free area for students who need those food options. Get the code for the lock from the nutritionist at Leo’s. Outside of the main dining area is a wide selection of ice cream and frozen yogurt, complete with toppings.

If you learn to take advantage of everything that Leo’s has to offer and not just stick with the same food day after day, you’ll be able to easily survive — and even enjoy — Leo’s. Over time, you’ll come up with some Leo’s favorites of your own as you explore each of the stations and come up with your own Leo’s creations, combining items from many stations to make a meal.

About the author: Ian Tice is a rising senior in the College. The pasta station, his favorite at Leo’s, is always worth the wait.